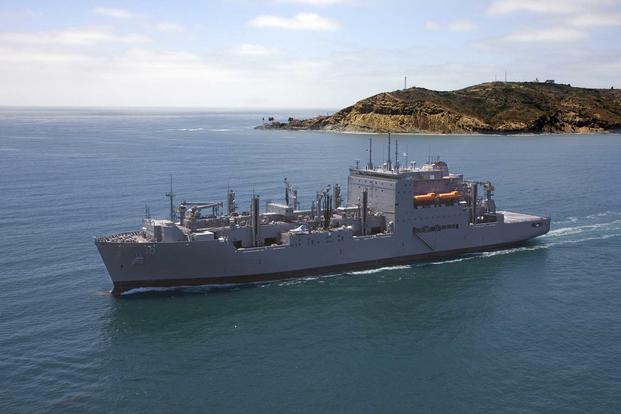 Last week, a former senior Navy official responsible for logistics and transportation operations was convicted of bribery and lying to investigators, according to the Justice Department.

Xavier Fernando Monroy, 64, a former director of operations for the Navy’s Military Sealift Command in South Korea, was accused of soliciting and accepting bribes to direct Navy contracts to a logistics company in exchange for money, meals, alcohol and “the services of prostitutes”, according to a press release from the Department of Justice on Friday.

In 2013, Monroy; James Driver, a civilian captain of a Navy freighter called the USNS Charles Drew; and Sung Yol “David” Kim, owner of DK Marine, allegedly “conspired to circumvent US Navy procedures to direct business to DK Marine in connection with the Drew’s late December 2013 stopover in Chinhae, [Republic of Korea]”, according to Monroy’s criminal complaint.

Court documents said Monroy and Kim were in contact as early as 2011. The matter was investigated by the Defense and Navy Criminal Investigative Services.

The corruption allegations are based on several instances where Monroy forwarded internal Navy emails to Kim regarding port visit schedules, contract logistics and, in one instance, a dredging project. It’s unclear whether those communications were classified, though the prosecution claimed the emails were ‘confidential’ and as a Navy officer, Monroy was not authorized to send them to Kim .

Kim, a South Korean citizen, told investigators he gave Monroy more than $30,000 in “loans”. Peter Brill, Monroy’s lawyer, pushed back against the prosecution’s evidence, saying much of it was based on Kim and Driver’s plea cooperation, saying the amount of the loan was only 4,000 $, which Monroy refunded within four days.

“They have no evidence of this other than Mr. Kim’s words,” Brill told Military.com by phone. “There’s no documentation on that; the closest they could get was to look at all of his bank account activity and say we can’t identify where some of the funds came from, so it has to be illegal.

“It’s kind of ridiculous if you think about it,” he added.

Kim and Monroy’s professional relationship quickly turned personal, according to court documents. Apart from well-wishes about personal emails and vacations in Thailand — which special agents claim Kim paid for — “on at least ten occasions during the plot, Kim and Monroy visited ‘salons’ together. , where the services of prostitutes could be hired,” according to his criminal complaint.

Brill confirmed that Monroy, Kim and Kim’s wife traveled together “a few times” to the Philippines and Thailand, but told Military.com that Monroy denies Kim paid anything. Monroy also denied soliciting sex workers, according to the attorney.

“There’s a difference between going out for drinks with your co-worker,” Brill said, “and asking your co-worker to spend money on parties and meals and prostitutes and the like, which is a lot more like at Fat Leonard [scandal].”

The Navy has been embroiled in numerous fraud and corruption scandals in recent years. Most notably, as Brill mentioned, the “Fat Leonard” scandal was a years-long saga in which authorities accused Leonard Glenn “Fat Leonard” Francis, managing director of Glenn Defense Marine Asia, of bribing officials of the Navy with cash, sex worker services, and luxury items in exchange for classified material and contract information.

Military.com also reported on a similar scandal last year in which a contractor allegedly defrauded the navy of around $50 million in Bahrain.

The Driver’s involvement appeared to surface in 2013, according to court documents, when Monroy “repeatedly provided instructions over the phone to Kim, which Kim forwarded to Driver via email” about how the captain of the ship could circumvent Navy procedures to have USS Charles Drew serviced by DK. Marine.

The Drew was believed to be maintained by another company, identified as “Company 1” in court documents, which had already been awarded a Navy breeding contract for South Korea earlier that year.

“On or about December 21, 2013, Monroy, Kim and a representative of Company 1 met the Drew when he arrived at Chinhae Port, ROK,” the criminal complaint states. “Despite objections from the Company 1 representative, Driver elected to have Kim and DK Marine provide husband services for Drew’s visit, with Monroy’s consent.”

Brill told Military.com that Monroy is a Marine Corps veteran with more than 25 years of service, retiring as a master sergeant in 2000. Neither the Navy nor the Marines could confirm military service. of Monroy, though that doesn’t mean he didn’t serve, as older veterans’ records are usually kept at the National Personnel Records Center in St. Louis, Missouri, which makes details of their service more hard to get quickly.

Monroy was also found guilty on Friday of lying to investigators during a 2019 interview.

Prosecutors alleged that Monroy made false statements by denying having a personal relationship with Kim, receiving compensation from Kim, or conducting Navy business at his company.

Brill questioned what was said in those interviews and suggested that a stroke Monroy suffered in 2016 may have contributed to memory loss issues, although he did not address any misrepresentations. specific.

“One thing I would like to get across is the fact that three of his former commanders or senior officers said things about him that you would hardly ever hear from another person,” Brill told Military.com about Monroy’s former military colleagues who were allowed to testify before the jury. “The level of honesty, integrity and dedication to his job and to the military was truly unmatched.”

Brill said it was unclear whether Monroy would appeal and added that his client was out on bail, living with his family in New York City while awaiting sentencing in November.

“We’re going to focus on making the best possible sentencing case, given his long service to this country,” Brill told Military.com, “and I hope the judge recognizes this sentence appropriately.”

Driver, the captain of the Drew, was charged in 2018 with conspiracy and pleaded guilty the following year. He was ordered to pay a fine of $2,000, according to court records. Driver is a Navy veteran and a graduate of the US Merchant Marine Academy, according to his sentencing memorandum.

Kim, who cooperated with investigators, was charged with conspiracy and bribery. He pleaded guilty to conspiracy in 2020, according to Monroy’s criminal complaint. His sentencing has been postponed until next month.

Monroy faces a maximum sentence of 35 years in prison.

© Copyright 2022 Military.com. All rights reserved. This material may not be published, broadcast, rewritten or redistributed.