Iqaluit taxi drivers protest against stones being thrown at their cars 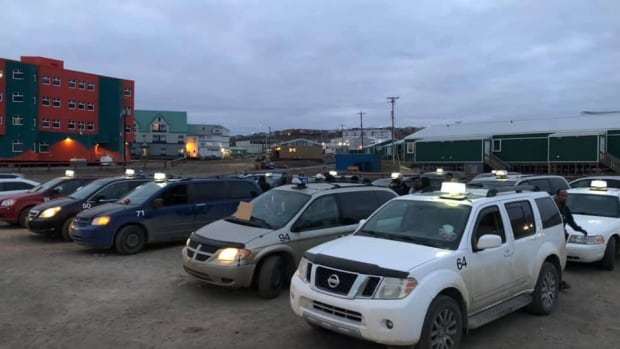 Taxi drivers in Iqaluit stopped providing services around 7 p.m. Saturday night to protest young people throwing stones at their cars, a problem that a taxi business owner says has continued for three years. .

At least 20 Caribou Cabs were parked near the Northmart, and they were not picking up any passengers.

Danny Savard, the owner of Caribou Cabs, negotiated with the drivers to get back on the road, but the drivers said they were fed up.

Taxi driver Omar Yuosef said the drivers called the RCMP, the city of Iqaluit, schools and company management for help.

â€œYou know the rocks and the speed of the car, it will definitely cause damage, which is why we are here, just for the safety of the roads,â€ Yuosef said.

â€œThe roads are not safe, we don’t think nobody is helping us with that, so we want to send a little message to the community to help us out a bit. You know this has been going on for at least three years and no one helped. “

Iqaluit City Councilor Kyle Shepard visited the drivers at Northmart and offered to meet with them Tuesday night to hear their concerns. The drivers then drove around Iqaluit as a group to educate the public about the problem. Taxi service to Iqaluit resumed later on Saturday evening.

Savard said he spoke with the mayor and was told the city would help resolve the issue.

He added that he was unaware that the taxi drivers were planning to assemble on Saturday night, but that he was aware of the reason for the protest.

â€œThis is a situation that I have been faced with, it isâ€¦ an ongoing problem,â€ he said. “The drivers took the matter into their own hands.”

He said that other than contacting the RCMP and the regulations department, there was little he could do.

â€œNow that we have the mayor on board, hopefully we can educate the public,â€ said Savard.

“This has been going on for three years and I would like the problem to be resolved and to have safe taxis for everyone, not just the drivers, but also for the customers who travel in the taxis.”