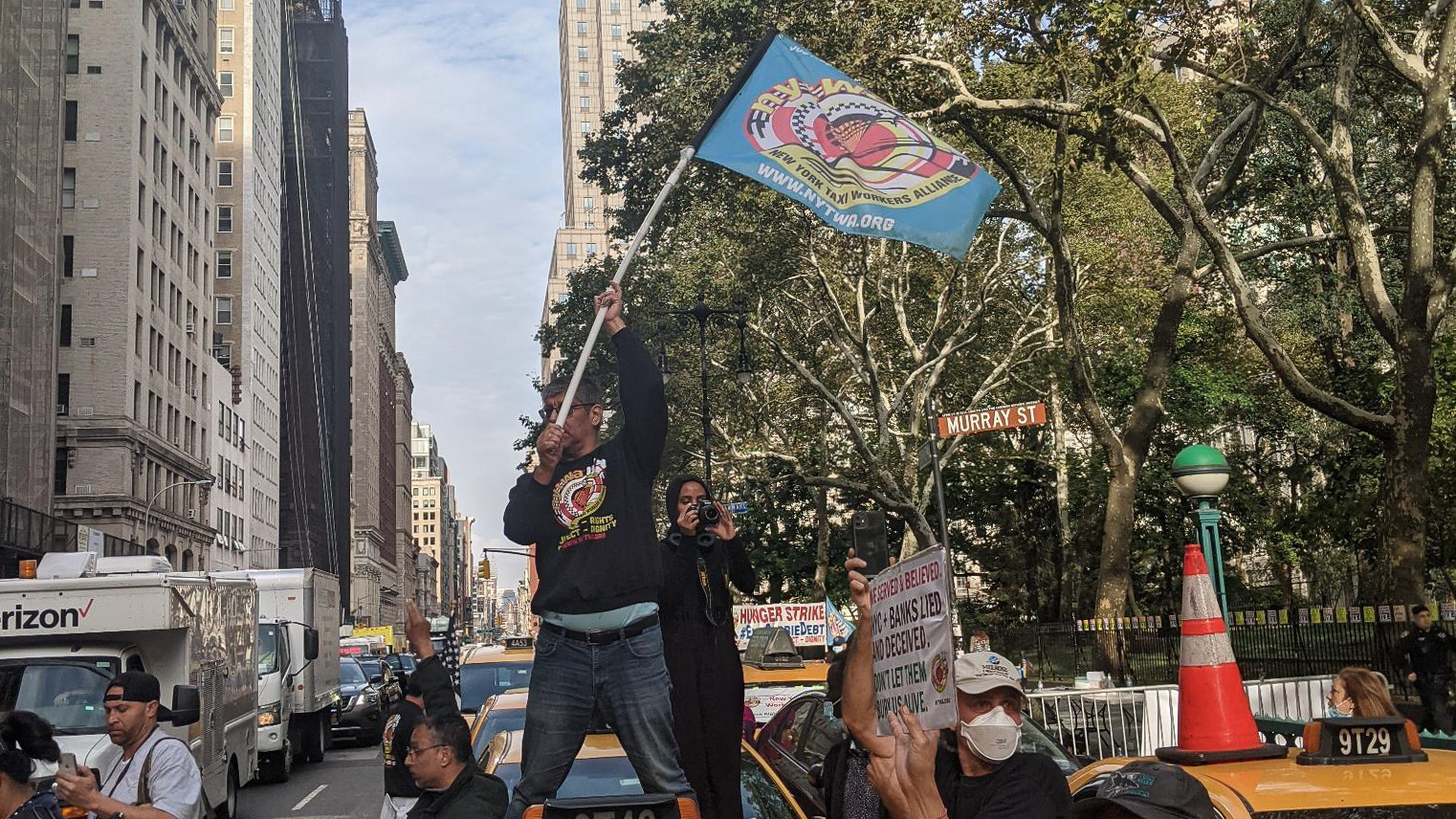 After a grueling two-week hunger strike by taxi drivers and an almost two-month camp outside New York City’s legislative center, taxi drivers finally have a reason to celebrate.

Yesterday afternoon, outside City Hall, dozens of yellow taxi drivers and owners and their supporters danced for joy after learning that Blasio’s administration had struck a deal with the New York Taxi Workers Alliance (NYTWA ), with 25,000 members. The two sides agreed to a taxi medallion debt restructuring plan, which would offer affordable rates to drivers and provide a city-funded guarantee on the principal and interest of the medallion loans.

For Victor Salazar, Ecuadorian immigrant and taxi driver since 1993, this announcement will allow him to get out of the mountain of debt under which he lived. He could finally get back to work in the city he loves with a load on his shoulders.

“It’s a much better deal than what the city offered us before this big victory for the yellow cab drivers in New York,” he said. â€œIt means we can take control of our lives with peace of mind so that we can serve New York City. “

â€œAfter a long and painful journey, we have returned home to victory,â€ said Bhairavi Desai, executive director of the New York Taxi Workers Alliance. â€œToday marks a new dawn, a new beginning for a workforce that has gone through so many crises and losses. Today we can say that owner-operators have achieved real debt relief and can begin to get their lives back on track. Drivers will no longer run the risk of losing their homes and will no longer be forced into debt beyond their lifetime.

Since 2014, New York’s yellow cab drivers have been in a state of crisis that has led to at least nine drivers taking their own lives. In 2004, to generate revenue, Michael Bloomberg’s administration increased the number of medallions the City would auction.

While the yellow cab industry was tightly regulated, with the city limiting the number of available yellow cabs to around 13,500, the city took a laissez-faire approach to ridesharing companies like Uber and Lyft, allowing them to flood the same market. Yellow cab revenues fell 36%, and in September the value of the medallions fell to around $ 80,000. Yet taxi drivers were still in debt and trapped in predatory loan deals for those same lockets that became virtually worthless.

Under the deal brokered by the city, NYTWA, Marblegate Asset Management, which is the largest lender of medallions, and Senator Charles Schumer, Marblegate agreed to restructure the outstanding loans to a principal balance of 200,000 $, which will consist of $ 170,000 in guaranteed loans, plus a City grant of $ 30,000.

The terms of the new loans will include an interest rate of 5% and a 20-year fully amortizable term. The restructuring will cap debt service payments at approximately $ 1,122 per month for eligible medallion owners. More importantly, and NYTWA’s main request, the City has agreed to provide funding for a guarantee on the principal and interest of the loans and will work with all other medallion lenders to secure the same terms.

â€œTaxi workers have worked tirelessly to make New York City the most vibrant city in the world, and we refuse to leave them behind,â€ Mayor Bill de Blasio said in a statement. â€œI am proud to have worked with Senator Schumer, NYTWA and Marblegate to achieve a fair and lasting solution that builds on the success we have achieved in reducing the debt burden for the frequent drivers who drive our business forward. city.

The mayor’s announcement is a rapid turnaround in his office policy. Initially, in September, Admiration offered taxi drivers in locket debt a $ 65 million grant relief program that provided $ 200,000 in debt relief and would see monthly payments reduced to 1,500. $ per month or less. Since the program was first launched, it had already distributed $ 16 million in partial debt forgiveness to 102 drivers and another 1,000 were in various stages of renegotiating their loans under the program.

For more than a year, NYTWA members engaged in several direct actions, including closing the Brooklyn Bridge to make their voices heard. After these actions failed to meet the association’s goals, on September 19, NYTWA launched a 24-hour sit-in in front of City Hall. On October 18, the workers decided to intensify their struggle and launched a hunger strike by taxi drivers.

Dipnn Das, a 50-year-old immigrant from Bangladesh, regularly worked 14 hours a day so that he could save enough to buy his own locket. The work was exhausting. For him, the biggest challenge was finding a bathroom when he needed it. Nevertheless, in 2004, after years of hard work, he was finally able to save enough to purchase a locket.

At first, he had no difficulty paying his monthly mortgage on his locket. The city was booming and business was going well. Yet as the industry began to evolve with the proliferation of UBER and LYFT, he struggled to make a living and began to fall behind in payments for his $ 300,000 debt.

With the pandemic, his situation worsened. Suffering from chronic liver problems and high blood pressure, he was afraid to work. Even if he chose to drive it. However, despite his poor health, he did not hesitate to go on hunger strike. For him, it was a cause worth dying for.

â€œI’m not afraid,â€ he said on the day the hunger strike was launched. â€œI want to die if I don’t have my justice. We will fight. “

As the taxi drivers’ hunger strike draws to a close, Victor Salazar looks back on the past two months with pride, knowing the sacrifice was worth every drop of sweat, blood and tears.

â€œWe can live with a certain respect and dignity. This victory will mean a lot of dignity for families who have been ignored for too long. “