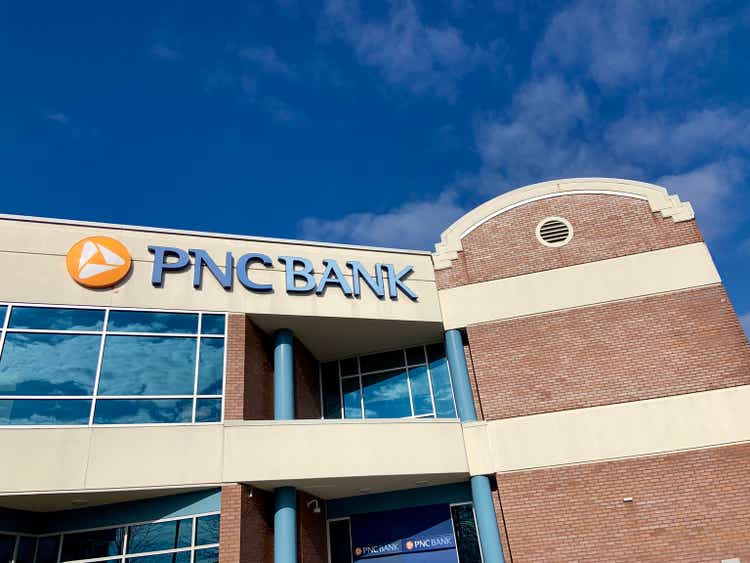 I was lukewarm on PNC Financial (New York Stock Exchange: PNC) in February because while I really liked (and still like) the management and how they positioned this bank for sustainable growth focused on commercial lending, I thought the valuation was more or less reflected these qualities. The shares have since underperformed their peers slightly, falling around 25% in a weak market for bank stocks.

Not much surprised me this quarter, including significantly above average commercial loan growth and a relatively more conservative view from management on the economy as a whole. While the company is still poised to reap long-term earnings from the BBVA deal, as well as this strong lending environment, I believe solid mid-single-digit core earnings growth is still in the cards, and with the stocks now cheaper, it’s a name worth reconsidering.

Better base income from PNC, but maybe not as strong as they should have been

PNC’s overall results for the second quarter were puzzling in some respects, including a slight loss in net interest income that was more than offset by higher fee-based income and better expense control. Overall, it was a good quarter supported by strong (and strengthening) loan demand, but with some countervailing challenges in generating distributed revenue.

Revenue was up 10% year over year and 9% quarter over quarter, beating expectations by about $0.03/share. Net interest income was up 18% yoy and 9% qoq, missing $0.10/share as net interest margin (up 21bp yr and 22bp yr). QoQ at 2.50%) was a bit below expectations, as were earning assets, despite outperforming expected loan growth. Commission-based revenue fell 1% year-on-year and rose 9% quarter-on-quarter, beating $0.14/share.

Operating expenses were up 10% yoy and more than 2% qoq (on a basic basis), and that was good for a $0.07/share pace. Basic earnings before provision were up 10% year-on-year and more than 21% quarter-on-quarter, beating $0.10/share. Lower provisioning added an additional $0.25/share over sell-side estimates, while taxes were down slightly, resulting in a $0.32/share overbase earnings overrun.

Strong demand for loans, but financing an emerging challenge

PNC had a strong quarter from a lending perspective, with lending up nearly 6% QoQ on a period-end basis and nearly 5% on an average balance basis, which is significantly higher than the overall loan growth of 4% in the broader banking sector. .

Corporate loans remained particularly dynamic, with C&I loans up more than 7% on an average balance basis, almost two points better than the market. Management pointed to higher utilization rates, as well as loan demand related to capital investments and working capital (inventory building), and it appears that the company has earned some share of loans backed by actives.

Consumer loans were weaker, with average balances down nearly 1% (several points below average). Auto lending was weak (down 4% yoy) and card lending (up 2% yoy) was lackluster, although mortgage lending was strong (up 6%) .

Financing loan growth is starting to appear as a bigger challenge, and that’s something I noted the other day in reference to First Republic (FRC) and its somewhat lenient NIM guidance. This is also something I repeatedly noted about the banking industry in general earlier this year – the risk of deposit betas being higher than expected as rates rose, leading to a cost of funding higher (and lower NIMs) than the street expected.

To be clear, PNC is still in good shape compared to most other banks. Even with this higher than expected deposit run-off, the bank still has a good loan-to-deposit ratio and the ability to fund loan demand. But management raised its expectations for deposit beta and noted that it would pay to maintain deposit balances, while shifting more to FHLB borrowing when needed (which costs around 3% or so now).

PNC management has already mentioned that it expects a recession next year, and given management’s generally conservative stance, that doesn’t really surprise me. It remains to be seen how this will affect the demand for loans (assuming there is a recession), as there are still a lot of industries/companies that have been underinvesting in capacity/capital goods for some time. time.

Higher deposit costs and lower margins don’t really hurt my model when it comes to PNC, as I had used higher deposit beta assumptions than many Street analysts. I also like the company’s continued leverage on a still very healthy lending/banking environment, and PNC doesn’t face the same capital constraints as some of its larger, more complex rivals.

I still expect strong mid- to single-digit (4% to 6%) core earnings growth from PNC over the medium to long term, and I’m not really concerned about the ability to PNC to compete for loan share, take advantage of the synergy opportunities of the BBVA transaction, or continue to generate excess capital for shareholders. Funding costs are something to watch, but I think other banks are more vulnerable than PNC. Between my preferred valuation approaches (basic discounted earnings, ROTCE-based P/TBV, and P/E), I think fair value today is around $180.

With PNC’s stock price weak, the potential long-term return is back in the double digits and relatively attractive. I won’t rule out the risk that a deterioration in the economic outlook for 2023/24 weighs on equities (and on banking sentiment in general), but I think longer-term investors can consider buying equities. at this level.