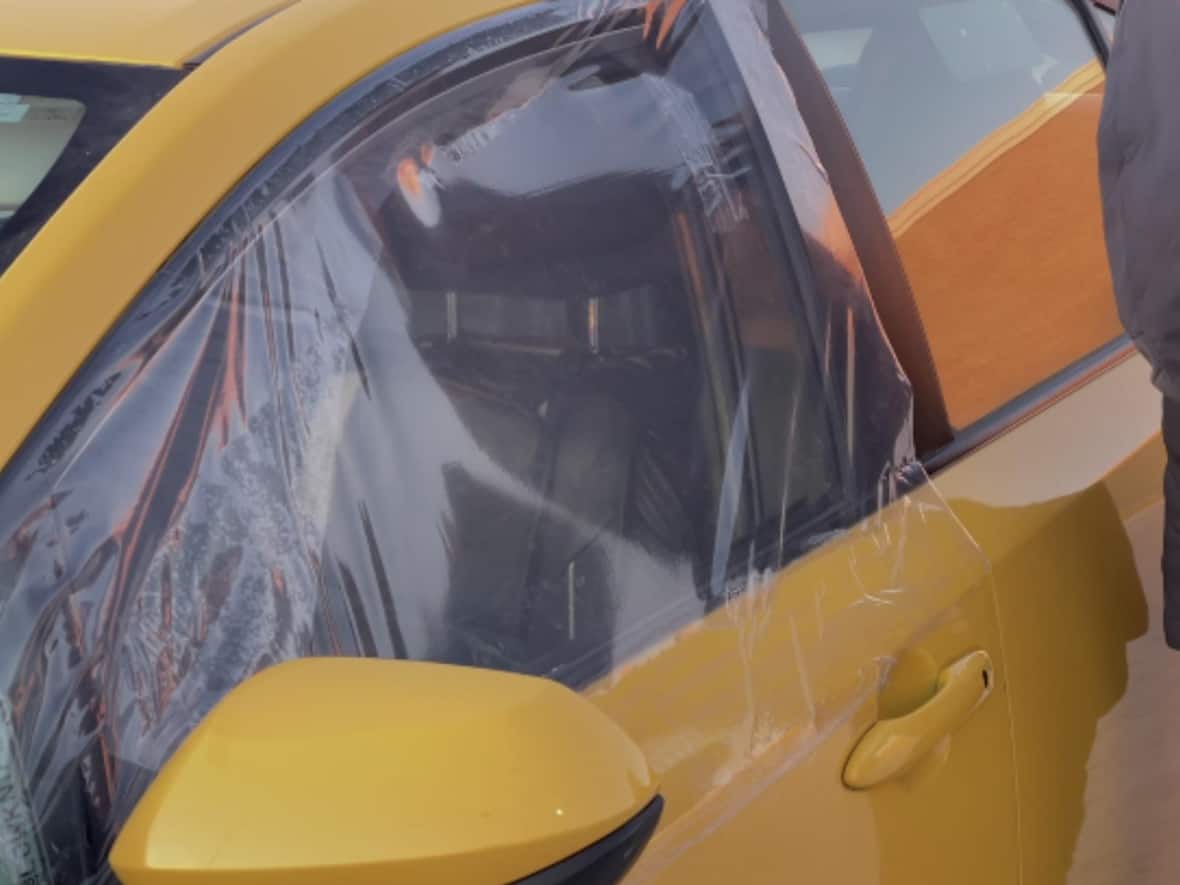 Yellowknife taxi drivers say a wave of vandalism has left them with shattered windows, slashed car seats, lost wages and growing fear for their personal safety.

Some vehicles are out of service, while others have plastic sheeting for the windows so they can keep working.

Abdi Hassan has operated his taxi in Yellowknife for 16 years. Hassan and several drivers describe a slow police response, and he fears that if the vandals don’t see the consequences, they will escalate into physical violence against the drivers.

He is afraid that if his car is damaged, then “it will be me. This is the reality”.

The driver community is “very connected,” so the cost of vandalism affects everyone, he said.

“If someone has damage, the other will help a little, lend something. That’s how we live.”

Hassan said if a window on the driver’s side was smashed, he would lose two weeks’ pay for lost driving time, in addition to having to pay for the repairs at around $500 per window.

A representative for Yellowknife repair shop All West Glass said it has seen a recent increase in business, with nine windows ordered in the past two weeks at $490 per installation.

The police are investigating

Halstead told CBC “we recognize it’s more than just vandalism to people. It’s their job…. It affects their livelihood.”

Halstead urged any concerned taxi drivers to come to the detachment to report the incidents.

“We want them to feel comfortable reporting these incidents to the RCMP and to know that the RCMP will take their concerns seriously,” Halstead said.

He wants the RCMP, the city and MPs to meet with taxi companies “to discuss our rights, our obligations and our safety.”

He said on Sunday three drivers phoned him to say their taxis had been vandalized overnight.

They were among 16 such incidents that hit all taxi companies last week, he said.

“It was really shocking to everyone,” Ali said.

For many drivers, the taxi is their only source of income, he said.

“Staying at home waiting for the vehicle to be repaired… is a disaster for them,” he said.

“There’s a lot of frustration…. If your property isn’t safe, you’re not safe,” he said.

Ali said he received two calls Thursday evening, and the officer called from a private number but did not leave a callback number.

The investigator told her she would be in touch on Friday evening, six days after the taxis were damaged

He said that response time left him and other drivers worried about their safety.

“To live in a community, we should at least feel safe,” Ali said.

“I came here seven years ago and never had a problem. People everywhere are friendly and it’s a place where I would like to spend the rest of my life,” he said. .

Ali said there were drivers ready to walk off the job if police and politicians did not work to protect them, but that would be a last resort.

“Some drivers say, let’s stop for a day or two until everyone realizes that we really matter,” Ali said.

Yellowknife taxi driver Damisachew Bekele is one driver willing to do just that.

Bekele said his taxi was vandalized four times, costing him $500 to replace the windshield this month, $500 in October and $15,000 in personal losses when someone set fire to it. his new vehicle.

“What comes to mind early in the morning when I wake up…will the window be broken by someone or not?”

“Early in the morning, 6am, you wake up and you go to work and you see someone come and break the window and take everything that belongs to you.”

“[Police] didn’t even call me [back]. I thought Canada was the safest place to live. I feel alone, helpless,” he said.

“We work hard, serving people. I want people to quit. It costs us money, time and stress,” he said.

Kareem Yalahow, vice president of City Cab, said his drivers felt like “second-class citizens” because “the police response is so slow”.

He said seven City Cabs were vandalized, including one where a vandal opened the front passenger seat with a sharp object.

“The drivers were telling me no one was answering the call,” he said, and no charges were laid.

Yalahow said drivers get paid fares, sometimes up to $50 a day, but if they ask for money in advance, their name and face will be posted on Facebook.

“No one ever says thank you for what we do for the public. One day we will stop driving,” he said.

Yalahow expressed concern over the use of Facebook and social media to “shame the public”, which creates “animosity” towards them.

“We are treated like criminals. Some people…the money has not been paid. [There is] this pattern of behavior of public shaming, personal injury, insults, non-payment of fares.”

Yalahow said ‘animosity is spreading’ through social media – fueling hatred against taxi drivers, which he describes as the start of ‘xenophobia’ and ‘racially motivated anger and rage’ .

The last time drivers did so was to attend the funeral of Ahmed Mahamud Ali, a taxi driver killed in 2018.

“We stopped for an hour and the whole town fell apart. I was at the dispatch office. People were calling me from the airport and I said, sorry, we’re attending a funeral.”

Yalahow wants the police to help locate the vandal(s) targeting the taxi drivers and it looks like the police are “not coming because it doesn’t concern them, period.”

“We must go as far as we need to enforce our rights as citizens of this country.”